This project aims at packaging OTB functionnalities as modules/applications/processing chains/call-it-what-you-like, with auto-generated interfaces wrapping the application, and allowing to access the functionnality in a number of different contexts (command-line, GUI, ...)

This idea is the result of different initiatives started in the past, and hopefully englobes them all, aiming at being an ultimate version of such a framework (even if we all know that as soon it will be stable and widely used, we will want to move to the next version ;) ).

So let's first give here credit to their original authors, and understand better where it comes from, and what the current implementations look like.

At first, there was otb::CommandLineArgumentParser, a little but very usefull class allowing to write simple application with dynamic parameter handling, well-known from the Unix users. Namely, it allows to define the interface of a command-line callable program to get something similar to what is described here for example The developer of the application describe the parameters of the application, give them names, documentation,... and otb::CommandLineArgumentParser handles the parsing of the command line to dispatch values in the proper parameters, generates an help automatically when incorrect syntax is encountered, ...

This allows basically the same application to have both a command line interface and a GUI, well suited for non-expert users who are not keen on typing cryptic commands in a shell as all geeks love to do.

In between, Tisham Dhar came up with the first OTB Qgis plugins, an initiative to push the OTB functionnalities to the widely known GIS called Qgis. You'll find more about this here.

The code is hosted at http://hg.orfeo-toolbox.org/OTB-QGis-plugins

One drawback of the approach is the need to develop, in addition to the applications, a specific QGis GUI each time we want to put a new functionnality in QGis.

When integrating the work of David and thinking of how we could migrate all the existing applications based on CommandLineArgumentParser, it quickly came to mind that it would be great to build the GUI with Qt instead of FLTK, and while we were at it, to also wrap them in QGis plugins, benefiting from the experience of Tisham from the first OTB-Qgis plugins. This work is currently hosted at http://hg.orfeo-toolbox.org/OTB-Applications

The core functionnalities are hosted at http://hg.orfeo-toolbox.org/OTB-Applications/file/tip/ApplicationGenerators.

The ProcessingChains subdir contains the generic framework describing an application (mostly a revamping of the original CommandLineArgumentParser class to make it more generic). An application is packaged as a shared library, and contains the definition of one class deriving from otb::Application It must implement two methods : one for Describing the parameters, one for Executing the application.

Next to it are independent "Wrappers" (application automatically built around the application shared library) :

The autogenerated interfaces are nice but were directly inherited from the already existing CommandLine application, aiming at backward compatibility during the implementation. As such, the wrappers are ok, but the GUI wrappers lack some fundamental functionnalities to have nice easily usable GUI. So it has been decided to rework the underlying data models to provide more functional GUIs, keeping roughly the same level of support for command line applications.

I/O Put the I/O mechanism out of the applications :

The project is hosted in an independent repository for the moment : http://hg.orfeo-toolbox.org/OTB-Wrapper

Current state is that the main parameters types are available in the core lib, with their corresponding QtWidget. It is not complete yet.

Some examples applications are in the Example directory. Here are some screenshots of what it gives for a simple smoothing application : 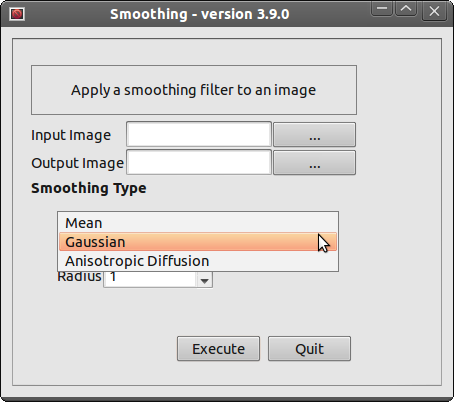 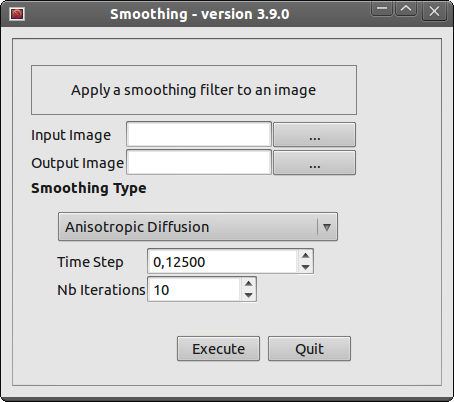 All existing applications (the ones in OTB-Applications) will be ported to the new framework as soon as we have a similar level of functionnalities (a Qt + a CLI interface generator).

We will also be able to rewrite all the Tisham's QGis specific plugins in this new framework.