First step is, of course, check that git is installed on your system :

The repositories are located on OTB server : git.orfeo-toolbox.org

When connecting to a server, git performs a certificate verification. This step may fail so you will have to setup the certificate manually :

The command to clone a repository using the HTTPS access is :

From this clone, you will not be able to push commits to the server (because the default user git is not allowed to). If you have an account on the server, you may use your real login :

The SSH protocol can also be used to access the repositories, but the link is slightly different :

Here, the login is always 'git' but the server will identify you based on your public SSH key. The server has a set of known public keys for registered users, so this access type cannot be used for an anonymous access.

Beware : some commands have a different behaviour between Git and Mercurial. For instance :

When you want to synchronize your local branch with the corresponding remote branch on official server, there are 3 cases :

If you want to rebase commits from the server, use git fetch then git rebase

Also remember that with Git there is an intermediate step between the workspace and local repository : the index.

The following workflow applies to the developers with write access on Orfeo Toolbox Git repositories. 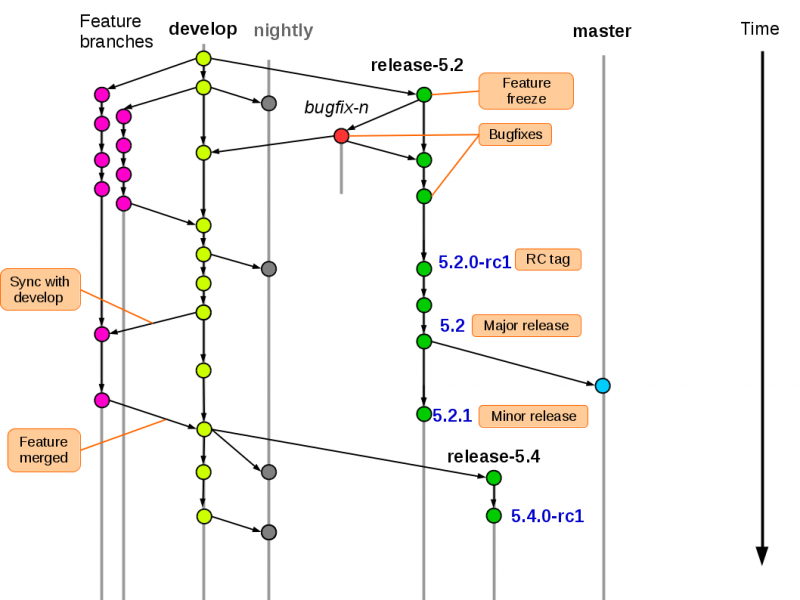 What are the constraints in OTB project?

The guidelines used to create the workflow are:

What model should be used?

The initial approach was to re-use and adapt the gitflow to the constraints and development habits in OTB. So there are only 3 main branches:

What commits should go in this branch ? Mainly merge commits from feature branches go into develop. But others types of commits can go directly in develop : typos, documentation, compilation warning and error fixes, test fixing, small bug-fixes that affects only develop (and not the last stable release).

What commits should go in this branch ? NOTHING ! A bot is taking care of the nightly update, this branch is simply fast-forwarded to the develop head.

What commits should go in this branch ? Only merges from the develop branch at the end of each release process. Note that only a subset of Git users can push to this branch.

The other branches are :

What commits should go in this branch ? All commits related to the development of this feature, synchronization merges from develop.

What commits should go in this branch ? Merges from Hotfixes for this release. Tags can be added to this branch to identify patches versions (i.e. X.Y.1, X.Y.2, ...)

The following main rules come along with the workflow described above :

When someone without write access on official repository wants to do an external contribution, this person may use the OTB github official mirror to use the pull request mechanism. So an OTB developer should fork this repository, add a branch with its contribution and do the pull request. After validation this pull request is integrated in a feature branch for testing. After checking that everything is ok and release manager approval, merge into develop or into release-X.Y branch for hotfix.

What is a bugfix?

The purpose of this section is to describe and illustrate what is a bugfix and what is not. Some general conditions can be listed to describe a bug fix :

Examples of commits that can be classified as bugfix :

Examples of commits that aren't bugfixes :

How to push a bugfix (related to a Mantis entry)

Which repositories are affected?

The source repositories that will follow this workflow are : OTB, Ice and Monteverdi.

All the other repositories have no particular workflow (not yet perhaps), they use a single master branch.

What Git commands should I know for this workflow?

Let's assume you have a clone of the OTB repository, the first thing you need to learn is to keep you repository on the develop branch and keep this branch up-to-date :

When you want to update your local branch to get new commits from the server (origin/develop), prefer using the rebase strategy. It will put your local commits after the tip of origin/develop and you won't have to do a specific commit for the merge :

Note : be careful if you try to rebase a feature branch on the head of develop branch. If you do this, make sure you known what you're doing. If commits from your feature branch are already pushed on the server, bad things will happen.

When you create a new feature, make a dedicated branch and switch to it:

When you want to publish your branch on the server :

If you need to track new commits in this branch (commits from other developers), you should specify the remote tracking branch corresponding to your local 'my_feature' :

When your feature is ready for testing, you can add it to the list of nightly tested feature branches : simply add the branch name in the file :

When your feature is ready for integration :

Then you can clean the list of nightly tested feature branches.

If you have a Pull request on github.com/orfeotoolbox/OTB

The github project repository is a mirror of official OTB git repository. All commits happen in official git repository and is then copied to github repo. So If you happen to have a pull request via github. Please notify about your changes on otb-developers googlegroup. Once the changes are reviewed it can be merged into official otb repository using the below workflow.

For PR on OTB GitHub clone on develop branch:

OTB Team has decided to move from Mercurial to Git after 5.0.0 release. The epic discussion happened in otb-developers on 10/2014!.

Technical aspects of this migration will be recorded in this wiki page.

Scrum activities will be done via OTB JIRA platform: OTB-731